Both pieces of hardware are earmarked for the top players in the U.S. college game, meaning it would be futile to try to sneak in votes for star quarterback Benoit Groulx of the top-rated Laval University Rouge et Or. 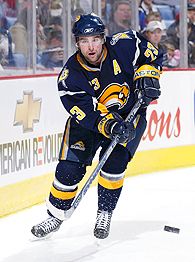 In football, the U.S. media chart and follow the Heisman race with absurd detail and passion, acting as if the opening week of the college football season is the New Hampshire primary, with someone who threw for 412 yards against Tinker Toy Tech establishing himself as one of the front-runners.

The Heisman resonates with history, with the sort of funky pose that used to be the staple of those black-and-white publicity shots we never see anymore. Yet to call it an award for the best college football player in the U.S. is a joke, since it almost exclusively is limited to offensive "skill" positions, excluding, for example, intimidating linebackers and dominating offensive tackles.

As if Florida State quarterback Chris Weinke was the top college football player in the land in 2000.

With the U.S. college hockey season in its early stages, the equivalent Hobey Baker chase is under way, complete with subtle and overt campaigning in press releases and on Web sites, both official and unofficial. The most recent winner, University of Denver defenseman Matt Carle, joined the San Jose Sharks in the final stages of the 2005-06 regular season, stepped right into a regular shift and is showing signs of having a long and productive NHL career.

It has been fashionable to point out that the Hobey has a mixed record as a harbinger of professional success. From that perspective, it can be both a blessing and a curse. You almost expect to see stories say, "Though a Hobey Baker Award winner, he is considered a top professional prospect."

"As an athlete, it's something to be proud of," said Colorado Avalanche defenseman Jordan Leopold, who won the Hobey Baker in 2002 as a University of Minnesota defenseman. "That's NCAA, this is professional hockey where the best in the world are here and it's a challenge day in and day out."

Yet the Hobey in many ways is more "legitimate," because it is far more likely to consider all positions. More so with the Hobey than the Heisman, at least in recent years, it is conceded that college hockey prowess doesn't necessarily translate into NHL success, and that there's not necessarily anything wrong with that.

Yes, we saw some of that philosophy over the years with terrific college quarterbacks who didn't fit the NFL mold, even as far back at Oregon State's Terry Baker (1962) and UCLA's Gary Beban (1967), and including Florida State's Charlie Ward (1993) and Nebraska's Eric Crouch (2001). But that kind of Heisman open-mindedness didn't stretch beyond one position. Example? Southern California tackle Tony Boselli was the best college football player in 1995, but he didn't get a sniff in the Heisman voting.

The Hobey list is filled with undersized buzzsaws who posted big numbers in U.S. college hockey, but couldn't escape the NHL strangleholds in the clogged-up game of the late '90s and early zeroes. And, as Leopold acknowledged, it's a bit different than football, because U.S. college hockey is only one of the several feeders into the NHL, with Canadian major junior still the top source.

At least Leopold is in the NHL and seems likely to end up playing over a decade. In taking a look at relatively recent Hobey winners, that distinction is about a 50-50 proposition. Only six of the past 15 players who held aloft the Hobey currently are playing in the NHL, and that leans into the punch about the Hobey being dubious as a foreshadowing of pro accomplishments.

But how does it stack up with the Heisman as a predictor of play-for-pay success?

Here's one ballot, in descending order, of the Hobey winner's pro credentials. It goes back 15 academic years, meaning the 2005 Hobey winner corresponds to the 2004 Heisman winner.

1. Paul Kariya, Predators winger
Hobey: 1993. The speedy Kariya, brought in from his hometown of Burnaby, British Columbia, by the recruiting powerhouse that was the Maine program in the early 1990s, played only one full season and part of a second in an Olympic year with the Black Bears before jumping to the NHL.

2. Chris Drury, Sabres center
Hobey: 1998. The Nordiques drafted Drury before he set foot on the Boston University campus, and his ability to score the prime-time goal was evident both in college and in the early part of his NHL career with the Avalanche. He's the only Hobey winner also to be awarded the Calder Trophy as the NHL's rookie of the year. Ever since, the footage of the chunky kid pitching his little league team from Connecticut past a bunch of mid-teens from Taiwan in Williamsport has been a televised game staple.

3. Brendan Morrison, Canucks center
Hobey: 1997. The British Columbia native got to wear a neat helmet for four full seasons at Michigan before signing with the Devils, and he ended up the frequent center for Markus Naslund and Todd Bertuzzi with the Canucks. He'll be a solid NHL player for another four or five seasons.

1996 Heisman: Florida quarterback Danny Wuerffel, who had a brief run in the Gators system under Steve Spurrier, last played in the NFL in 2002.

4. Ryan Miller, Sabres goaltender
Hobey: 2001. If Miller, who played collegiate pucks in his hometown with Michigan State, continues to progress and again helps lead the Sabres deep into the playoffs, he will move up.

2000 Heisman: Florida State quarterback Weinke, who holds a clipboard for the Carolina Panthers.

5. Carle, Sharks defenseman
Hobey: 2006. The Alaskan, a product of both the national development program and the United States Hockey League, helped DU win NCAA championships in his freshman and sophomore seasons, then signed with the Sharks about 17 seconds after the NCAA announced the Pioneers wouldn't be in the tournament field after his junior season last spring. Keith Magnuson came from the same school, and Carle might play as long.

6. Leopold, Avalanche defenseman
Hobey: 2002. The Minnesota native had a low-profile stay with the Flames, but part of that had to do with Darryl Sutter's system for what, at least on paper, was the stingiest team in the NHL. After he came to the Avalanche in a much-criticized (in Colorado) trade for Alex Tanguay, he still hasn't played because of offseason hernia surgery, but is on the verge of stepping into the lineup.

2001 Heisman: Eric Crouch, Nebraska. This one's tricky because Crouch was a defensible choice, in the Gary Beban and (Terry, not Hobey) Baker mold. But

7. Brian Holzinger, retired center
Hobey: 1995. After winning the award at Bowling Green, he also jumped right into the NHL late in the season, with the Sabres. He had a solid journeyman's career with four teams, getting 93 goals in 547 NHL games and finishing up with Columbus in 2003-04.

1994 Heisman: Rashaan Salaam, Colorado running back. Another NFL washout, in part because he was too much a fan of the Doobie Brothers.

8. Scott Pellerin, retired winger
Hobey: 1992. He and Kariya gave Maine back-to-back winners, and he also stuck around over a decade in the NHL as a lunch-bucket winger, getting 72 goals in 536 games. Like Holzinger, he last was seen in the final season before the lockout, in his case with the Blues.

1991 Heisman: Desmond Howard, Michigan wide receiver-returner. Howard retired following the 2002 season after a spotty career in which his crowning achievement was a 99-yard kickoff return touchdown for the Packers in Super Bowl XXXI. He was that game's MVP.

9. Jason Krog, Chicago Wolves (AHL) center
Hobey: 1999.
Also raised in British Columbia, he won the Hobey after his senior season at New Hampshire. He's bounced up and down, but stuck two full seasons with Anaheim and even had three goals during the Ducks' 2003 playoff run. But he's back in the AHL, with the Thrashers' affiliate in Rosemont, Ill., in the O'Hare International Airport flight pattern.

1998 Heisman: Ricky Williams, Texas running back, who has been more like Cheech and Chong than Barry Sanders, but has had four 1,000-yard seasons.

10. Mike Mottau, Lowell Devils (AHL) defenseman
Hobey: 2000. He came from Thayer Academy and Boston College and won the Hobey after his senior season. He still is only 27, but he has the look of an AHL lifer, though he has played 23 NHL games with the Rangers and Calgary.

1999 Heisman: Ron Dayne, Wisconsin running back. The former Badger hasn't broken through to stardom, but at least he's still in the NFL, with the Texans.

11. Junior Lessard, Iowa Stars (AHL) winger
Hobey: 2004. A Quebec native, he signed with the Stars as a free agent after his great senior season at Minnesota-Duluth. After a solid rookie pro season with Iowa (he also appeared in five games with Dallas), he wasn't able to stick with the Stars at the outset of the season. He was the AHL's player of the week out of the gate. Give him time, and he might have a solid NHL career.

2003 Heisman: Jason White, Oklahoma quarterback. To be fair, his knee problems handicapped him in his brief run in Titans camp before he announced his retirement, but he never threw an NFL pass.

12. Marty Sertich, Iowa Stars (AHL) center
Hobey: 2005. His trophy season came in his junior year at Colorado College, followed by a disappointing senior season. At 5-foot-8 and 165 pounds, the former "Mr. Hockey" in Minnesota was "undersized," but he had a decent camp and preseason with the Stars and would have a bona fide shot at sticking in the NHL, if given a chance.

13. Brian Bonin, retired center
Hobey: 1996. A huge scorer for the Minnesota Gophers, and like Sertich a former "Mr. Hockey" in the State of Hockey, he played only 12 NHL games in a career that otherwise had him putting up big numbers in the minors and Europe. The other familiar element: He was listed at 5-9 and 187 pounds, and maybe he came along too soon.

14. Chris Marinucci, retired center
Hobey: 1994. Stop us if this sounds familiar. He was a great scorer at Minnesota-Duluth and played 13 games with the Islanders and Kings, but otherwise was a minor-league star who also played a few seasons in Europe.

1993 Heisman: Charlie Ward, Florida State quarterback. Ward, indisputably a great athlete, turned to the NBA, but he could have played somewhere in the NFL. So, we'll give football the benefit of the doubt.

15. Peter Sejna, Peoria Rivermen (AHL) winger
Hobey: 2003. The Slovak was nearly 21 when he began his career at Colorado College, and he hasn't been able to stick with the Blues. His stature (5--9 and 175 pounds) is still considered a problem, even in the new NHL.

The head-to-head academic year tally as a harbinger of professional success? Hobey 6, Heisman 8, one push. Though extremely subjective, that's a lot closer than we expected, too. Maybe we should stop looking down on the Hobey. Or somewhere amid all those weekly charts and polls, make fun of the Heisman.

Terry Frei is a regular contributor to ESPN.com. He is the author of "Third Down and a War to Go" and "Horns, Hogs, and Nixon Coming."