PHOENIX -- Mike Tyson was ordered released without bond on a felony drug possession charge Friday after an early-morning arrest in which Buckeye, Ariz., police said they found two bags of white powder in his back pocket. 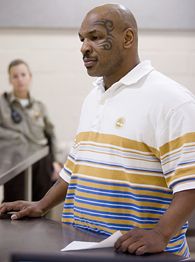 "He admitted to using today and stated he is an addict and has a problem," according to a police probable cause statement filed in Maricopa County Superior Court. "Mike admitted to possessing bags of cocaine and said he uses any time he can get his hands on
it."

Tyson was arrested early Friday, after nearly ramming a police SUV, on suspicion of driving under the influence and possession of cocaine when police stopped him shortly after he left a Scottsdale nightclub. According to the report, an officer saw Tyson trying to wipe a white powder off the console of his BMW as he approached.

In court Friday morning, the former heavyweight champ was dressed in an oversized golf shirt, baggy jeans and tennis shoes. He said nothing, periodically tapping his feet or fingers while waiting for the judge to enter. Tyson, who was not charged with DUI, did not enter a plea and had no lawyer.

He was scheduled for a preliminary hearing Jan. 16.

No alcohol was found in his system, and a DUI-drugs charge was not filed pending toxicology tests.

Under the terms of his release, Tyson must submit to drug and alcohol testing and may not drink or take nonprescription drugs while the case is pending.

He refused comment as he left courtroom. The only comment he made while walking out of jail in the late morning was, "Good morning, Arizona."

Tyson, who shot to fame by knocking out Trevor Berbick in 1986 to become the youngest heavyweight champion in history at age 20, has had several run-ins with the law over the years, including serving prison time for rape. The most infamous incident was in the ring in 1997 when he bit Evander Holyfield's ear during a fight.

Sgt. Larry Hall said the boxer was stopped about 1:45 a.m. after his car almost struck a sheriff's vehicle while leaving the club.

"He showed signs of impairment and voluntarily submitted to field sobriety tests," said Hall, a member of the Buckeye Police Department who was working in the area as part of a holiday DUI task force.

Hall said the boxer was alone in the car.

"He had to slam on his brakes and take evasive action," Arpaio said of the officer. "Luckily, the deputy was alert."

While at the county jail, Arpaio said Tyson was isolated from other prisoners for his own safety.

The sheriff said Tyson has been to the county jail before -- as a guest talking to juvenile offenders about the dangers of drugs and alcohol.

"The irony is he did a great job with these kids -- stay away from drugs, don't drink, stay out of trouble," Arpaio said.