DETROIT -- Gazing from the sideline of Ford Field, Detroit Lions coach Dan Campbell rested his hands on his knees, slightly slouched over in anticipation of the game's final play.

As quarterback Jared Goff found rookie receiver Amon-Ra St. Brown on a walk-off touchdown pass for a 29-27 upset win over the Minnesota Vikings that gave the Lions their first win this season, Campbell yelled, leaping in the air with joy as Goff rushed over to him for a big hug.

After experiencing that emotional high of victory for the first time this season, Campbell didn't lose sight of the bigger picture. 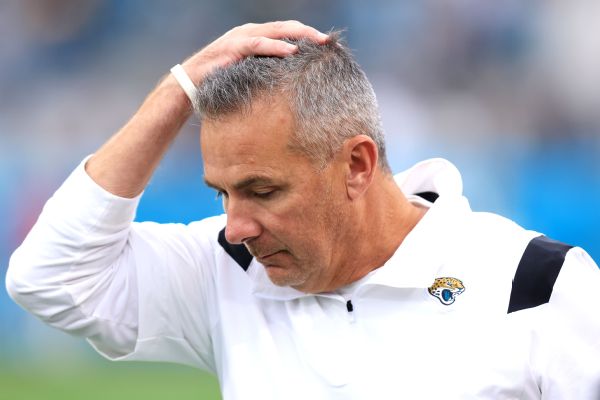 Jan. 14: Hired as Jaguars' seventh head coach
Feb. 10: Hires Chris Doyle as director of sports performance. Doyle was longtime head strength coach at Iowa but reached a separation agreement in June 2020 after he had been accused of making racist statements and bullying and belittling Black players
Feb. 11: Fritz Pollard Alliance blasts Jaguars and Meyer for hiring Doyle. Doyle later resigns, with Meyer and GM Trent Baalke saying they did not consider the implications of hiring him
April 29: Jaguars select Trevor Lawrence first overall. The team also took RB Travis Etienne, Lawrence's Clemson teammate, 25th. Meyer admitted in a post-draft news conference that he had wanted to take former Florida WR Kadarius Toney with that pick
May 20: Sign Tim Tebow to play tight end, a position the former Heisman Trophy winner had never played
July 1: NFL fined Jaguars $200,000 and Meyer $100,000 for excessive contact during a June 1 OTA. Team also ordered to forfeit two OTAs during the first week of the 2022 offseason
July/August: Meyer has Lawrence alternate days with the first-team offense with Gardner Minshew throughout training camp to earn the starting quarterback job
Aug. 25: Meyer announces Lawrence as the starter
Aug. 28: The Jaguars trade Minshew to Philadelphia
Aug. 31: Meyer says he and Baalke considered a player's vaccination status when determining final cuts. NFLPA opens an investigation
Sept. 12: Jaguars look unprepared and confused during a season-opening 37-21 loss at Houston, which was regarded by many as the worst team in the league entering year
Oct. 2: Two days after losing a Thursday night game in Cincinnati, a video of a woman dancing near Meyer's lap goes viral on social media
Oct. 4: Meyer apologizes for his actions. "I just apologized to the team and staff for being a distraction. Just stupid and so I explained everything that happened and owned it. Just stupid. Should not have myself in that kind of position." Roughly an hour after Meyer's news conference another video emerged on social media that appeared to show Meyer touching what appeared to be the same woman's bottom while he was sitting at the bar
Oct. 5: Khan issues a public rebuke of Meyer over the two videos
Dec. 11: NFL Network reports that Marvin Jones Jr. had to be persuaded to return to the team facility after leaving in response to Meyer's vocal criticisms of the wide receiver corps. NFLN also reported that Meyer called his assistant coaches losers during a staff meeting and asked them to defend their resumes. A league source refuted the report about the meeting to ESPN
Dec. 12: Jaguars lose 20-0 at Tennessee in the fourth shutout loss in franchise history. After game, Meyer denied both NFLN allegations and said anyone leaking information risks losing their job
Dec. 13: Khan says he will not make any hasty decision nor will he be swayed by emotion when it comes to what to do with Meyer
Dec. 15: Ex-Jags kicker Josh Lambo alleges Meyer kicked him in the leg while he was stretching in warmups before a practice during the week of the final preseason game. Meyer said the "characterization of me and this incident is completely inaccurate and there are eyewitnesses to refute his account." Meyer was fired hours later
-- ESPN's Michael DiRocco

"This game ball goes to the whole Oxford community and all those who were affected," Campbell said, referencing the shooting Tuesday at nearby Oxford High School that left four teenagers dead and several others with injuries. "And that being said, man, I just ... I want us to not forget these names: Madisyn Baldwin, Hana St. Juliana, Justin Shilling, Tate Myre, Phoebe Arthur, Jon Asciutto, Riley Franz, Elijah Mueller, Kylie Ossege, Aiden Watson and Molly Darnell, who's a teacher.

"Those names for all those who will never be forgotten and they're in our hearts and in our prayers."

Even without dynamic running back D'Andre Swift (shoulder), the Lions were playing inspired football on the heels of the shooting. The school is located a little more than 30 miles outside of Detroit. The Lions honored the victims with a moment of silence ahead of the kickoff, while also wearing T-shirts, hats and helmet decals as a tribute.

"Like to me, I just ... my thought was, 'Hey man, if we can for three hours just ease their suffering a little bit, that's worth it. That's worth it,'" Campbell said. "And so that's kind of how I thought of this and we just did a great job. Players, they responded, played well."

The team held a meeting on Saturday to revisit the full details of the Oxford High shooting to make sure it knew the magnitude of what it was playing for. With some guys so locked in on football, Campbell and his staff wanted to enlighten them on specifically what was going on by showing them videos and media reports of the horrific scene. A 15-year-old student is accused of killing four of his classmates and is being charged as an adult. His parents were also charged with involuntary manslaughter.

The Lions said they tried to rally around the story.

"You never hope for a tragedy like this, but you hope to be a light for those people and a positive thing that they can have fun watching today," Goff said, fighting back tears while wearing an Oxford hat. "I hope that they were all watching today and were able to enjoy that win, and we can take their minds off it for whatever it may be, three hours. I think anytime we can do that, it's a lot bigger than our sport, it's a lot bigger than us. I think that today is one of those special circumstances that we were able to rise to the occasion and make something special happen."

Lions fans were able to experience something special on Sunday, as well: a victory for the first time in over a calendar year. Detroit will no longer have to field questions about a winless season after celebrating its first regular-season win since Dec. 6, 2020. It also marked the Lions' first victory at home since Nov. 15, 2020.

At halftime, the Lions held their largest lead of the season after going up 20-6 and ended a streak of 10 straight games in which they were held under 20 points. Goff controlled the offense, going 25-for-41 with 296 yards, three touchdowns and an interception. Without Swift, Jamaal Williams stepped up with 17 carries for 71 rushing yards and St. Brown caught 10 passes for 86 receiving yards.

Detroit (1-10-1) also snapped an eight-game losing streak against the Vikings, dating to 2017. This is the latest in a season (the Lions' 12th game) since 1970 that a team won its first game on a deciding touchdown on the final play of regulation. The previous mark belonged to the 1999 Cleveland Browns, who were 0-7 before winning on a Tim Couch Hail Mary on Halloween against the New Orleans Saints, according to the Elias Sports Bureau.

After scoring the game-winning touchdown, St. Brown described the scene as something he'll never forget.

"Definitely, definitely. I mean, my first NFL touchdown, first NFL win, I'm going to remember this day for a long time," St. Brown said. "The way it happened, the way it unfolded was ... I mean it was just ... it couldn't be any better."