There are several series in Major League Baseball this weekend with playoff implications, but the main focus has to be on a potential World Series preview -- and a blockbuster matchup at that.

Here's what we're looking forward to this weekend:

There's no bigger marquee matchup in baseball right now than Yankees-Dodgers, which is the Sunday night game on ESPN (7 p.m. ET). If this were indeed a World Series preview, who would be your pick?

Sam Miller: Let's logic-puzzle this one out: The Dodgers have the best starting pitchers in the game, while the Yankees have the best relievers in the game (and each team is middle-of-the-pack in the other's strength). Which of these is likely to be the bigger benefit in October? Starters generally throw more innings, which seems to favor the Dodgers. But relievers will throw more high-leverage innings, and relievers in October throw a disproportionate share of innings compared to the regular season, which seems to favor the Yankees. But here's the tiebreaker: A bunch of incredible relievers can make the rotation better, by easing the expectations on the starters; presumably, the Yankees starters will pitch better in October knowing they need to get only a dozen or so outs.

But ah, wait, a bunch of incredible starters can really make the bullpen better, by literally becoming the bullpen. The Dodgers are so deep they should be able to move four high-quality starters into relief work, and suddenly their bullpen might actually rival the Yankees' on paper. Both teams have been incredible this regular season, but I think that final factor is where the postseason format confers the most advantage to one of them. (Their offenses have been roughly equal.) So I'll take the Dodgers.

David Schoenfield: Did somebody mention 1978? No? Fine, be like that. I'm still showing you these highlights:

Of course, Reggie got his revenge off flamethrowing rookie Bob Welch in Game 6 as the Yankees won 7-2 to beat the Dodgers for the second consecutive season. Check out Jackson's bat flip of sorts on his seventh-inning home run:

Where am I going with this? Sure, the Yankees have had some unlikely performers boost their offense this season. They have a great bullpen. But if these two teams meet in the World Series, the Yankees will not have Mr. October in their lineup. I'd take the Dodgers.

Eddie Matz: My wife is always accusing me of having really poor reading comprehension for a writer. Maybe she's right, because I'm not sure if this question is asking for my pick on Sunday night or my pick in a potential Yanks-Dodgers championship series. If it's the former, I'm taking L.A. because Clayton Kershaw > Domingo German. If it's the latter, I'm taking L.A. because Dodgers' rotation > Yankees' rotation. So I guess the Dodgers are my pick either way.

The Braves slowed down the Mets at bit last week, winning two of three at Atlanta. Will the Amazin's recapture some mojo this weekend when the Braves come to New York?

Matz: The reason the Braves slowed the Mets is because, um, they're a good baseball team. Sure, the Mets have played better than .700 ball over the past month, but most of that damage has come against Washington Generals kind of competition: Padres, Pirates, White Sox, Pirates (again), Marlins, Royals. The only legit opponent New York has faced recently is the Nationals, against whom the Mets required multiple miracles to not lose the series. Oh, and the Indians, whom they just swept in somewhat convincing fashion. So really you could argue that said mojo has already returned. But I digress. Bottom line is, the Braves are better than the Nats, and they're way better than the Mets. Mike Foltynewicz against Jacob deGrom in the opener is a mismatch, so I do like the Amazin's in the opener. But Atlanta takes the series.

Games to keep an eye on this weekend 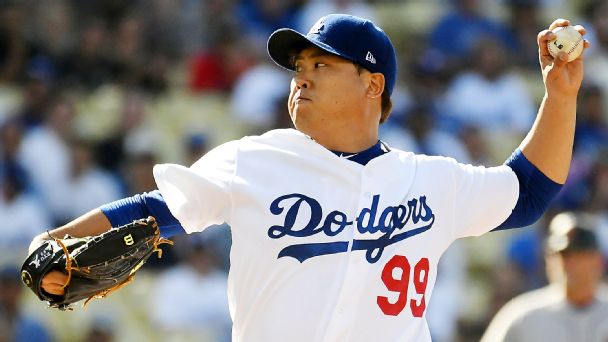 Yankees at Dodgers, Fri., 10:10 p.m. ET -- The weekend's big series kicks off with NL Cy Young favorite Hyun-Jin Ryu tangling with the Bronx Bombers.
Blue Jays at Mariners, Fri., 10:10 p.m. ET -- Justus Sheffield, the former Yankees prospect who came to Seattle in the James Paxton trade, faces Vlad Jr., Bo and the Jays in his first major league start.
Nationals at Cubs, Sat., 2:20 p.m. ET -- The Nats are piling up runs of late, but Cubs starter Jose Quintana has a 1.38 ERA in his past four starts.
Giants at A's, Sat., 9:07 p.m. ET -- Madison Bumgarner's numbers in the Bay Bridge Series (4.32 ERA, 1.280 WHIP in eight starts) are worse than his overall stats. He gets a chance to improve on that.
Yankees at Dodgers, Sun., 7 p.m. ET (ESPN) -- The two powerhouses close out their much-anticipated series. Next stop, October?

Miller: Here's a gruesome fact about the Mets, who have outhit the Braves (by wRC+) and outpitched the Braves (by FIP) and yet are nine games behind the Braves: Of the 16 position players who've spent at least 100 innings in the field this year, only two have been above-average defenders, by defensive runs saved. The Mets are about 90 defensive runs behind the Braves overall. But whatever, that's all baked into what we already knew, except for this: Of those two above-average defenders, one -- by far the team leader in DRS this year -- is Jeff McNeil, who is now injured. This is a poor defense, and it has gotten worse lately, not better, and I'll say that will continue to make the difference.

Schoenfield: Sam makes a good point. For example, J.D. Davis has been playing left field. He's not a good left fielder. That's not really his fault. He's a first baseman/third baseman who started just 25 games in the outfield in the minors, but injuries have forced the Mets to play Davis out there. But ... he's also been one of the best hitters in the National League since the All-Star break (leading in batting average and OPS entering Wednesday), so the Mets need his bat in the lineup. Anyway, here's the weird thing about the defenses: Entering Wednesday, the Braves had actually allowed a higher batting average on balls in play than the Mets (.311 to .308). This weekend, the Mets will roll out deGrom, Zack Wheeler and Steven Matz, who has a 2.56 ERA over his past five starts with a 30-6 strikeout-to-walk ratio. They take two of three at home, where they've been excellent.

Matz: "Who." That's Joey Votto's moniker. Ya know, because he plays first base. So like, "Who's on first?" Classic. Now if only somebody could convince Eugenio Suarez to go with "I Don't Know." I'd even settle for "IDK."

Schoenfield: I could lie and I say I just went through all 30 team lists of Players' Weekend nicknames to make sure I didn't miss a particularly creative or humorous one. Alas, that feels like a lot of work to find out Dodgers pitcher Dustin May is going with "Big Red," which, while apropos, also feels like a slap in the face to all the Secretariat fans out there. THERE IS ONLY ONE "BIG RED" AND THE '73 BELMONT STAKES IS ONE OF THE GREATEST SPORTING EVENTS OF ALL TIME. So I'll go with the Seager brothers:

I guess Corey is the fun one in the family.

Miller: To paraphrase Bill Walton, you're one of those young guys who has been forced by the media of today to live in this qualitative and binary decision-making world. You should just say, "What are some of the Players' Weekend nicknames that you like?"

And the answer to that is, uh, well, I'm just happy they're happy.

The Nationals are on an offensive tear, averaging more than 10 runs over their past eight games. How many runs will the Nats score this weekend against the Cubs at Wrigley?

Schoenfield: The Cubs have obviously played (and pitched) much better at home. Jose Quintana has been terrific in August with a 1.38 ERA and .555 OPS allowed, which means either: (A) He's locked in or (B) he's due for a bad outing. I'd expect at least one gem from one of the Cubs' starters, so I'm going 13 runs.

Miller: If I'm not mistaken, the Nationals will be facing three lefties -- good ones, in Quintana, Jon Lester and Cole Hamels, but lefties all the same -- and they've really mashed lefties this year. Only one team in the National League (the Diamondbacks) has hit lefties harder. Howie Kendrick, Brian Dozier and Yan Gomes might all seem like candidates for mayor of Averagetown, but against lefties they're collectively hitting .332/.392/.576. I think it's probably too late in the game for a veteran like Lester to learn to throw right-handed, and so I'm going to take the over! But since you didn't set an over/under, let's say 19.

Matz: For whatever reason, Wrigley Field brings out the not-so-good in Washington. In the Joe Maddon era, the Nats are 13-18 at the Cubs' den. In those games, they've averaged a decidedly ho-hum 4.5 runs per game. Yes, Chicago is starting three lefties. And yes, Washington has raked against southpaws this year. But oddly enough, the Nationals are scoring just 4.3 runs per contest when the opposing starter is a lefty (they're at 5.5 when a righty starts). In other words, they've pummeled left-handed relievers. Against southpaw starters, they've been downright middle of the pack. If this is starting to sound a little like that scene from "The Princess Bride" where Dread Pirate Roberts and the Sicilian engage in a battle of wits ... well, I apologize. But clearly, I cannot choose the wine in front of you. I can, however, choose 14 runs for Washington's weekend output.

Matz: Lost in all the talk about how New York has bludgeoned teams into submission this year is this: The Yankees themselves are giving up boatloads of homers this season. In fact, their staff has a 4.3% home run rate, which is third-worst in the majors. But wait, there's more: Away from the Bronx, that clip spikes to 4.8%, the highest road rate in baseball. But wait, there's still more: In 65 innings at parks not named Yankee Stadium, German has served up 18 gopher balls. Eighteen!!! And now he has a meeting at the offices of Bellinger, Muncy & Partners, LLC (Love Long-ball Crushing). All of which is to say, I'll take Kershaw and the Dodgers. P.S.: Is it too late for German to change his Players' Weekend nickname to "Smoke 'N Mirrors"?

Miller: You didn't really cite wins to a bunch of upstanding citizens like Eddie, Dave and myself, did you? German has been glue in a falling-apart rotation, but he's no Kershaw -- especially as Kershaw has returned to, oh, not exactly 2013-16 Kershaw levels, but arguably 2011-12 Kershaw levels. Kershaw is my pick (to win his 14th game, while German stays stuck on 16 wins).

Schoenfield: Does it seem like Kershaw's season has flown under the radar a bit? At least until this week, when he passed Sandy Koufax on the Dodgers' win list. Then again, his 2.71 ERA is higher than his career mark. Kershaw has been pitching very well, but most of his starts the past two months have been against bottom-third offensive teams (Blue Jays, Marlins twice, Padres twice, Cardinals). I think the Yankees score four off Kershaw, but the Dodgers win 6-5 when Welch fans Reggie to end it.

Each week, we ask our panelists to choose one hitter they think will hit the most home runs and one pitcher they think will record the most strikeouts in the coming weekend. Panelists can pick a player only once for the season. We'll keep a running tally -- and invite you to play along at home.