It was some kind of Saturday tripleheader for Mike Dee, who literally works both sides of the street on Yawkey Way. At Fenway Park, he is chief operating officer of the Boston Red Sox. Across the street, he is president of Fenway Sports Group (FSG), the ballclub's sister company that is involved in an array of sports other than baseball.

One is college football. On Saturday afternoon, FSG client Boston College played Notre Dame. Dee was occasionally on the phone with staffers in South Bend, Ind., who had organized a travel package for 100 fans of the Eagles. He also was watching the game at FSG's offices along with 30 corporate sponsors FSG had attracted for Boston College.

Another is stock car racing. FSG bought a 50 percent stake in Roush Racing earlier this year. So on Saturday night, Dee was watching a baseball game live -- Game 2 of the ALCS in Boston -- and a NASCAR race on TV. Carl Edwards and Matt Kenseth, of the renamed Roush Fenway Racing, were chasing the Nextel Cup at Lowe's Motor Speedway in Concord, N.C.

Dee's long, frenzied day finally ended at 2:45 a.m. Sunday -- with mixed competitive results. Boston College beat the Irish to remain undefeated and is ranked No. 3 in this season's first BCS standings list, which was released later Sunday. Edwards ran fifth at Lowe's, but Kenseth limped in at 34th. The Red Sox fell to Cleveland in 11 innings. But it was a smashing day all around for the businesses of the baseball club and its synergistic sister company.

"I was with another guy who's been with FSG from the start during the [Red Sox] game," says Dee, who, it should be noted, had additional company in FSG's Fenway Park suite: another 30 corporate sponsors involved with the firm. "We looked at one another and said, 'Wow!'"

Fenway Sports Group's short three-year history illustrates the economic and competitive advantages to be found with a smart, aggressive big-market team. The three other teams still alive in the MLB playoffs are being hailed for high achievement with low payrolls. The Indians, Diamondbacks and Rockies each pay their players less than half the $143 million that goes to the Red Sox. But in baseball, as in life, there's no virtue in being poor.

When you have a storied franchise such as the Red Sox and can command top dollar for your on-field product and leverage your "brand" into other profitable enterprises  well, the economic wind is at your back. That doesn't make the Red Sox a lock to win the World Series or even the ALCS. But it does give them the resources, if spent well, to stay in the hunt year after year. The budget teams' ability to contend -- especially the likes of Arizona and Colorado, with shorter histories and shakier followings -- is far more precarious.

The Red Sox leadership troika of owners John Henry and Tom Werner and CEO Larry Lucchino have set an entrepreneurial tone since taking control of the franchise in 2002. For starters, they've jacked up the revenue produced by Fenway Park with the gusto of Big Papi jacking home run after home run. In the past five years, they have increased the stadium's capacity by 10 percent to 39,600, putting seats in ingenious and often expensive places. The seats atop the Green Monster cost $140 apiece; two rows of field-level "dugout boxes" go for as much as $312 per seat. The park also is festooned with many more signs than under previous ownership, as the team has tripled its roster of corporate sponsors to 90.

Yet you can milk a 95-year-old ballpark only so much, and there are many financial demands to meet. There are the bankers, who expect regular payments on the debt from Henry's $700 million purchase of the franchise and 80 percent of the New England Sports Network (NESN). Then there are the fans, who expect a competitive team. That drives the $143 million payroll.

The Red Sox can't go the route of their archrivals, whose new, cash-spewing Yankee Stadium will open in 2009. Henry, who pledged soon after becoming the owner that he wouldn't raze Fenway, had to take a different route. So he created Fenway Sports Group. The idea: Take the club's wealth of corporate contacts and knowledge of its six-state market and leverage them into non-baseball enterprises.

This isn't the only MLB team to expand into non-baseball businesses.
Part of the appeal is the ability to generate income that is exempt from Major League Baseball's revenue-sharing rules. In San Francisco, Peter Magowan created Giants Enterprises to stage non-baseball events at AT&T Park. George Steinbrenner's Yankee Global Enterprises holds ownership stakes in the YES Network and a memorabilia business in addition to the Yankees.

But FSG's size and scope is far greater. It runs tournaments for the PGA and for AVP beach volleyball. Its "Red Sox Destinations" sells spring training and away-game travel packages to fans. It sells ads and sponsorships for MLB Advanced Media, baseball's online division. And that's just for starters in a long list of ventures and customers.

Its biggest plunge: the estimated $60 million investment in NASCAR. With the addition of Roush Fenway Racing, according to Dee, FSG's revenues have risen to about 60 percent of the ballclub's level. (Forbes magazine pegged Red Sox revenues at $234 million in 2006.)

In launching a business, as in batting a ball, timing is everything; and FSG's was perfect. It started in 2004, the same year the Red Sox ended their 86-year championship drought. The new sister company had instant credibility because everyone associated with the Red Sox was considered brilliant. And six of the club's executives pull double duty at FSG.

"The rise in the trading level of the team definitely helped," says Dee, lapsing into Red Sox front-office business-speak. Translation: The club wasn't just wicked hot; it was a hot stock.

One of Dee's early scores illustrates the Sox-FSG synergies at work. With Boston College set to join the Atlantic Coast Conference in 2005, Dee saw an opportunity for the school's revenue-producing sports to produce a lot more revenue. He pitched FSG's services to BC athletic director Gene DeFilippo, saying, "We can really raise your trading level."

DeFilippo signed on, and the FSG sales people went to work. They riffed through the Red Sox rolodex to land a host of new corporate partners for BC. One was Sovereign Bank, which couldn't crack the Sox sponsor lineup because Bank of America had a lock on the bank category. But Sovereign became the lead sponsor on BC's weekly sports highlight show -- which, of course, is broadcast by NESN.

The key element that travels well across Yawkey Way to FSG is salesmanship. These people can sell like Jonathan Papelbon pitches -- rapidly, effectively and frequently.

"They can sell because they really understand the value of an event or property," says Bob Bowman, chief of MLB Advanced Media. Bowman's group retained FSG to generate advertising and sponsorships for its online enterprises, and it is pleased with the results. The firm even got Chevrolet to take some of its MLB advertising online for the first time. 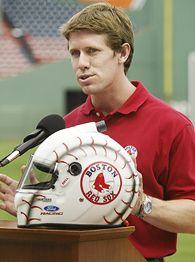 It's easy to see how FSG can leverage its staff's wiles into that kind of baseball-related gig. But what do those staffers know about putting on golf and volleyball tournaments? To solve that problem, FSG recruited people who do have those skills.

Jay Monahan, an executive vice president, previously ran events for sports-management giant IMG. Now, he handles such matters for FSG and leads its "business development" team. And, he testifies, it sure helps develop new business for FSG when you can treat prospective clients to ALCS games.

"It may be hard getting appointments with some people at other times of the year, but there isn't one that you can't reach right now," Monahan says.

Scoring business off the reflected glory of the Red Sox has a downside, though. Every team goes through down cycles. The Old Towne Team probably will never lose its hard-core fans, but a team in decline can lose its aura of sports-business genius and its corporate cachet.

"Certainly, we'd much rather be winning the World Series and have the wind at our back," he says. "But the team missed the playoffs last year; and from an FSG perspective, it had no impact whatsoever."

The young firm is still a work in progress. FSG has found it's better suited to some things -- for example, consulting with companies about sports investments (it's up to 15 clients in that area) -- than others.

The first business it created, called Fanfoto, shoots souvenir pictures at sports events. The enterprise grew to have customers in all four major league sports, including nine teams in MLB. But Fanfoto was labor-intensive and demanded way too much management attention for a firm with only 24 home-office employees (plus the six it shares with the Red Sox). In May, FSG sold majority ownership of the business to SharpShooter Imaging, a specialist in that niche.

And the firm's biggest plunge -- into NASCAR -- is no sure winner. The theory is that FSG can use the Red Sox connection to create more New England fans and sponsors for Roush Fenway Racing's teams. The region lags behind other parts of the country in embracing stock car racing, according to the venture's co-owner Jack Roush, who saw opportunity in this underharvested territory.

On July 1, at the Lenox Industrial Tools 300 in Loudon, N.H., Edwards drove the No. 99 car, which carried a Red Sox logo, and wore a helmet painted to resemble a baseball. The car also bore the logos of Gillette and Lumber Liquidators, two sponsors FSG landed for the event. Two days before, a Red Sox-Rangers game was preceded by an introduction of the Roush Fenway drivers, along with the 99 car.

But, some wonder, is this enterprise really about creating synergies, or is it about Henry's being a huge NASCAR fan? FSG has entered the sport at a time some of its key economic indicators, including this year's TV ratings, have sagged.

Dee claims this is no vanity investment. The Roush deal had to be taken to the rest of the Red Sox ownership group, which heartily approved it.

"The tremendous growth of NASCAR from 1995 to 2005 has plateaued," he says. "But it's right up there with MLB and the NFL in terms of viewership and corporate sponsors, and it opens up FSG to a whole new world of opportunities."

John Helyar is a senior writer for ESPN.com and ESPN The Magazine. He previously covered the business of sports for The Wall Street Journal and Fortune magazine and is the author of "Lords of the Realm: The Real History of Baseball."