After months of intense speculation, the future of Paris Saint-Germain striker Kylian Mbappe has finally been decided with news that the most exciting young striker in world football will stay in Paris and not move to Real Madrid on a free transfer this summer.

Already long established as one of the most coveted young players in world football, the superstar is about to enter the most exciting phase of his career.

The France international has won more as a 23-year-old than most professional players could dream of in their entire careers, including a FIFA World Cup (2018), UEFA Nations League (2021) and five Ligue 1 titles.

Despite having only completed six full seasons since turning professional in 2015, Mbappe has accrued a dozen major trophies as well as a plethora of individual honors and records -- and his continued success shows no sign of running dry any time soon.

As the glittering era of Lionel Messi and Cristiano Ronaldo slowly comes to an end, the era of Mbappe is set to begin. This is his time. The next decade could well belong to him.

Here's an assessment of Mbappe's achievements to date: his incredible stats, output for club and country and the likelihood of maintaining his ridiculously high standards in the years to come.

Saturday's hat trick against Metz puts Mbappe on 135 goals in 183 games in the French top flight since making his competition debut with Monaco in December 2015 at the tender age of just 16 years and 347 days -- thus becoming the club's youngest first-team player ever in the process.

He then became Monaco's youngster goal-scorer ever (17 years and 62 days) the following February when he scored his first goal for the club before he had even signed a professional contract.

Both of these aforementioned records previously belonged to Thierry Henry, who was perhaps the last great French prodigy to kick off his career at the Stade Louis II.

Mbappe went on to score just one goal in 11 fragmented appearances in his maiden campaign in Ligue 1 (spending a total of 287 minutes on the pitch) but has never scored fewer than 13 goals in a single French top flight season since.

Indeed, from the start of the 2016-17 season onwards, Mbappe has produced an average of 22 league goals per season with his single-season high (33 goals) coming with PSG in 2018-19 -- the same year he amassed 39 goals in 43 games across all competitions for the Parisian side.

After notching a penalty against former club Monaco in a 2-0 win for PSG in December 2021, Mbappe became the youngest player (22 years and 357 days) ever to score 100 goals for a single team in Ligue 1.

As a predominantly right-footed player it probably doesn't come as much of a surprise to discover that the majority of Mbappe's goals for PSG have been scored with his right foot.

Of the total 171 goals he's scored for the club in all competitions, 128 of them have come via his trusty right, while just 38 have come via the left.

Headers have been scarce, with only four scored by Mbappe during his time at the Parc des Princes so far. That said, even rarer still is the one goal he has successfully prodded over the line with his shoulder, coming against Brest in a 3-0 Coupe de France victory back in March 2021.

While 12 of Mbappe's goals for PSG have taken the form of long-range strikes from outside the area, the overwhelming majority (159) have come from shots attempted inside the 18-yard box.

His proximity conversion rates also reveal that he enjoys most success with shots taken in a central position (158 goals from 570 attempts) in comparison to angled shots from the left (nine goals from 147 attempts) and right (four goals from 61 shots) hand side of the goalmouth.

Trophies and awards at PSG

Despite only being 23, Mbappe has already won five Ligue 1 titles, four of which have come since his €180 million transfer to PSG in August 2017 -- a deal that saw him become the most expensive teenager ever, as well as the second most expensive player of all time behind Neymar (€222m.)

In the five seasons that have followed, Mbappe has collected 13 club trophies with PSG: Including his five Ligue 1 titles, three Coupe de Frances, two Coupe de la Leagues and three Trophee des Champions (although technically he wasn't included in the matchday squad for the 2018 version.)

Indeed, in only his fifth full season as a PSG player, Mbappe is already the club's second all-time leading goal scorer (171 goals) behind Edinson Cavani (200 goals).

Of course, talk of Mbappe's achievements at club level couldn't pass without mention of his incredible record with the France national team.

To date, Mbappe has scored 26 goals in 54 games with Les Bleus, including a fine strike against Croatia in 2018 that saw him become only the second teenager ever to score in the World Cup final after Brazilian icon Pele, who personally congratulated the youngster on social media in the aftermath. 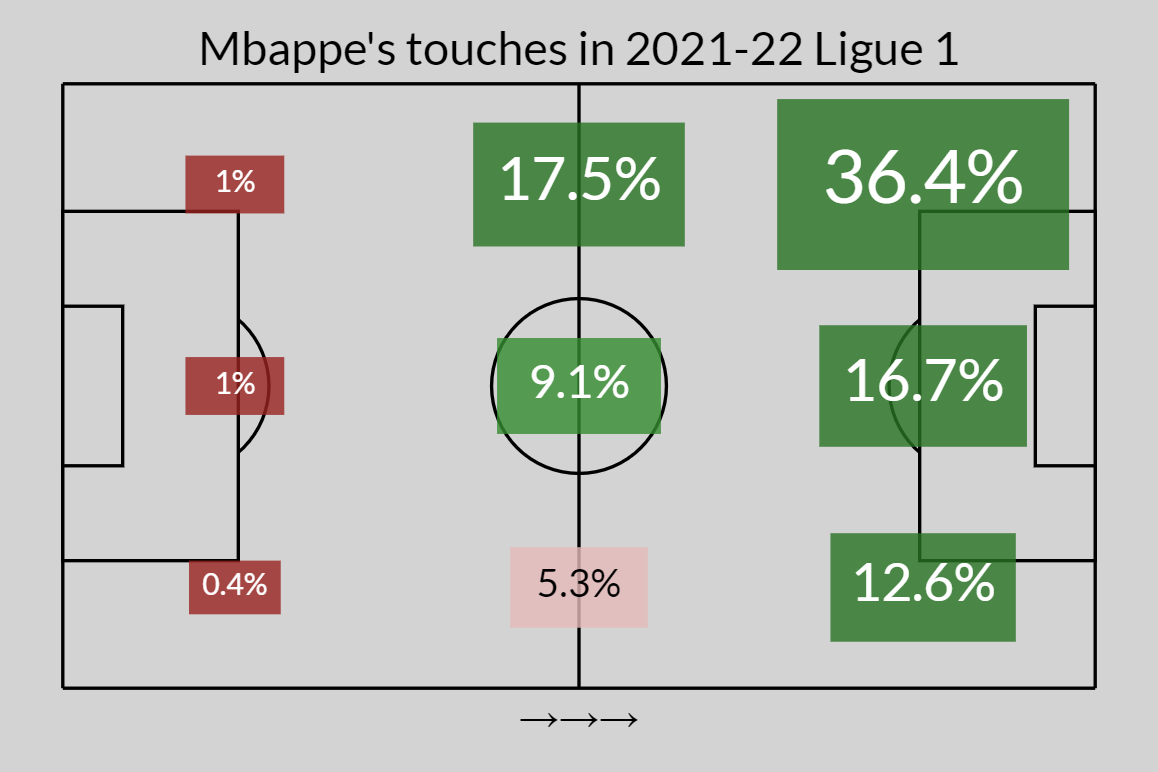 While scoring goals at an elite level appears to come perfectly naturally to Mbappe, there is far more to his game than hitting the back of the net.

The all-action forward is second only to Bayern Munich's Thomas Muller in terms of assists created across Europe's 'Big Five' leagues (England, Germany, France, Spain and Italy) this season, having produced 17 assists to Muller's 18 thus far.

When it comes to combined goals and assists, the young Frenchman leads the way out in front right across Europe with 45 goal involvements to his credit in 2021-22.

According to our statistics, Mbappe is only the fourth player across Europe's 'Big Five' leagues to produce more than 25 goals and 15 assists in a single season since 2010-11, joining Ronaldo (2014-15), Luis Suarez (2015-16) and PSG teammate Messi (who did so on five different occasions while at Barcelona.)

Most frequent goal connections at PSG

Mbappe has been present in all of the club's top four "goal connection" permutations (i.e, the two players involved in scoring and assisting goals) in all competitions since 2017-18 onwards.

However, notably, Angel Di Maria is set to leave the club this summer on a free transfer and the future of Mauro Icardi isn't clear either.

How Mbappe stacks up against other youngsters

As a former Golden Boy and three-time Ligue 1 Young Player of the Year, Mbappe's credentials as one of the finest young talents in world football are beyond dispute.

Just consider this: Mbappe has scored 171 goals in league and Champions League competition since he made his debut for Monaco in December 2015.

Taking into account all of Europe's 'Big Five' leagues, that is over 70 goals more than any other player has achieved before celebrating their 24th birthday in that same timeframe.

Mbappe in the Champions League

Since making his Champions League debut at the age of 17, Mbappe has scored 33 goals in 53 games in the competition -- six goals in nine games for Monaco; 27 in 44 games for PSG.

This includes 18 goals scored in knockout phase games. Only seasoned competition heavyweights Ronaldo (27), Robert Lewandowski (24) and Karim Benzema (19) have more, though Mbappe is considerably younger than all three.

Mbappe's debut season in the Champions League came with Monaco during the 2016-17 season and saw the young striker announce himself on the continent by scoring six goals in the knockout stages including a famous breakthrough strike against Man City in the round of 16.

His 33 goals overall in the competition is the 10th-highest career tally among active players and the joint-22nd highest tally overall, neck and neck with former Real Madrid target man Fernando Morientes.

Real Madrid will be upset at not landing Mbappe as his connection with 34-year-old Benzema for the France national team in recent years has been superb.

After falling out with coach Didier Deschamps over the Mathieu Valbuena sex-tape scandal, Benzema was absent when Mbappe made his breakthrough in 2017 as he was left out of the side for over five years from 2015 to 2021, but Les Bleus have never lost a single competitive match in which Mbappe and Benzema have played together (P9, W5, D44, L0) and the former has assisted the latter for five of the 20 goals that the team have scored while they were both on the pitch.

This Mbappe-Benzema assist connection has proved by far the most productive means of goal production for France since 2021, followed by Olivier Giroud-Antoine Griezmann (3).

Individually at club level, Mbappe has been involved in 60 goals for PSG in all competitions this season. The the next player across all of Europe's 'Big Five' leagues in that list is Real Madrid's Benzema (59).

Indeed, Los Blancos' next highest goal scorer in all competitions is attacking midfielder Marcos Asensio with 12 goals in 42 games, while winger Rodrygo has nine goals in 48 games.

Further down the running order of Real's shot-shy attacking stable, Eden Hazard, Gareth Bale, Luka Jovic and Mariano Diaz all bring up the rear with just one goal scored each this season.