Liverpool went top of the Premier League for the first time since September after dishing out an irrepressible 4-0 drubbing of Manchester United at Anfield on Tuesday.

The Reds are now unbeaten in 13 league games as they compete in the title race with Manchester City, over whom they took a two-point lead ahead of the reigning champions' game in hand against Brighton & Hove Albion on Wednesday.

United arrived at Anfield mired in inconsistency, having won just twice in their last nine outings, and things took a downward turn pretty quickly for them when Luis Diaz opened the scoring for the hosts after just five minutes.

Having provided the assist for Diaz's tap-in to capitalise on some porous United defending, Salah then doubled Liverpool's lead in the 26th minute by putting the finishing touches to a gorgeous flowing team move that incorporated 25 slick passes exchanged effortlessly between 10 Liverpool players (including goalkeeper Alisson) over the course of a mesmerising minute or so.

Indeed, centre-back Virgil van Dijk was the only player to not be directly involved in the passage of play that led up to the scoring of a goal that encapsulated the gulf in quality between these two great rivals right now. Here we break down the play, pass by pass. 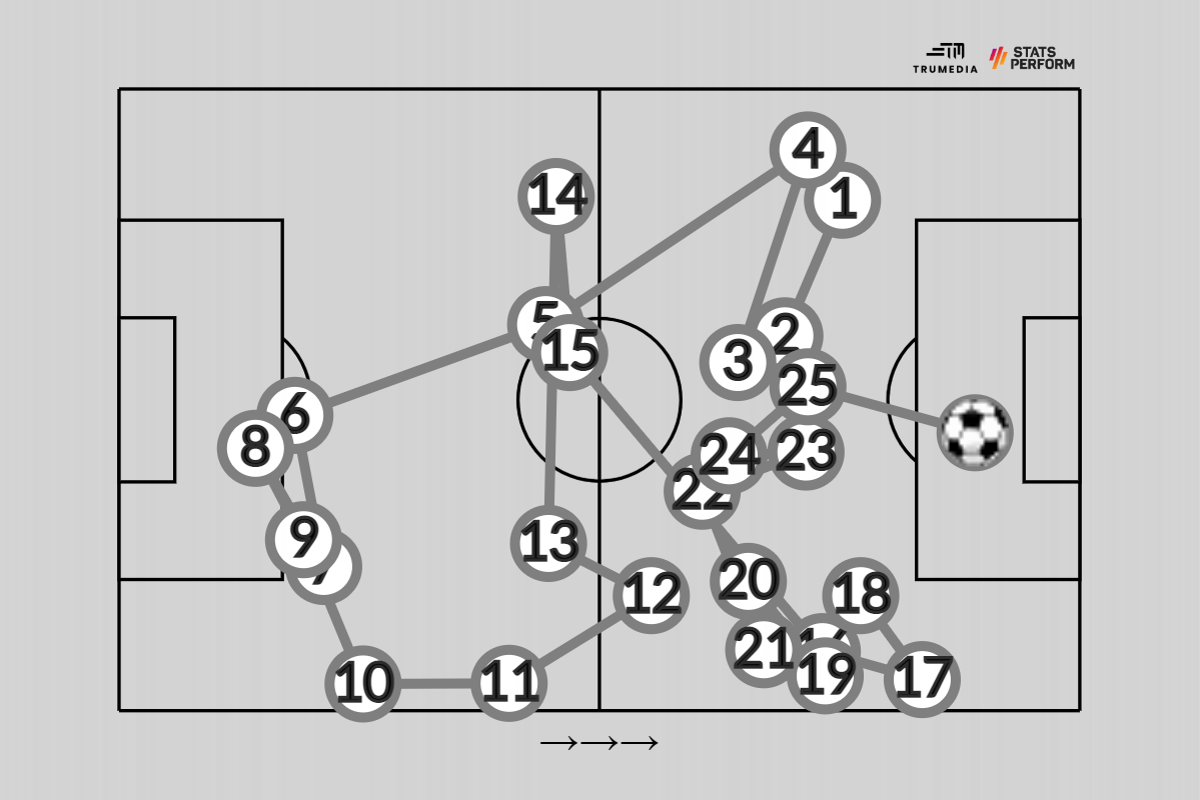 1. The move began with Diaz intercepting a defensive headed clearance from Victor Lindelof, one of three Manchester United centre-backs that interim coach Ralf Rangnick started this game with in the hope of repelling Liverpool's attacking threat. Diaz then moved out toward the left touchline and fed a simple ball infield to the feet of Fabinho.

2. Roughly 30 yards out from the United goal, Fabinho turned through 180 degrees with the ball under close control before looking up and laying a short pass back to midfield partner Thiago Alcantara.

3. Thiago quickly shuttled a first-time right-footed pass into a pocket of space he had spotted out on the left wing where Andy Robertson was waiting in anticipation in an advanced position.

4. Under minimal pressure, Robertson took a couple of touches to steady himself and scanned the pitch for options before deciding to simply roll the ball back to Thiago, who had followed his original pass in order to close the gap between the two players.

5. With Marcus Rashford suddenly bearing down on him, Thiago maneuvered his body between the ball and the United forward as he successfully wriggled free of the press. He then played a simple pass all the way back to goalkeeper Alisson in order to relieve the pressure.

6-7. Alisson had set the tone for the match in the second minute, when he calmly evaded Bruno Fernandes with the ball at his feet inside his own penalty area. Here, after taking a moment to assess his options further upfield, the goalkeeper got the ball moving again by exchanging a quick one-two with centre-back Joel Matip on the right-hand side of his penalty area.

8-9. Allisson then gave the ball back to Matip, who turned and hurriedly moved it further out to the right flank with a short pass to Trent Alexander-Arnold.

10-11-12. Alexander-Arnold then bypassed pressure from Anthony Elanga by opening his body and playing a short pass directly up the touchline to find Fabinho. The Brazilian then did likewise by rolling the ball over the halfway line and into the path of Mohamed Salah, who in turn stunned the ball into the possession of Jordan Henderson before peeling away and darting up the wing.

13-14. Rather than utilise Salah's attacking run, Henderson turned inside and switched play entirely with a long, lofted ball back out to Robertson in the left-back position. The Scotland defender -- who, like Henderson, Fabinho and Diaz, completed more than 90% of his passes in the final third over the course of the game -- then kept things nice a simple with a neat pass to nearby Thiago.

15. Taking a few steps toward the centre spot, Thiago looked up and drifted a lovely accurate pass out wide that dropped directly at the feet of Salah, who was still stationed wide on the right. After a difficult start to his time at Liverpool, Thiago is now thriving and put in a man-of-the-match performance against United. The Spain midfielder pulled the strings and took more touches of the ball than any other player on the pitch (132), ending his 80-minute shift with a pass completion rate of 95.6% from the 113 he attempted.

16. Salah -- who scored a hat trick as Liverpool won 5-0 at Old Trafford in October -- collected Thiago's weighted pass and took a couple of steps in from the touchline before reversing the play with a cheeky backheeled pass down the line to Henderson, who had run past the Egyptian to occupy a wide position in the final third.

17-18-19-20-21. Unable to cross, Henderson exchanged a straightforward one-two with Alexander-Arnold before doing likewise with Fabinho and then completing his involvement in the move with a longer ball to find Matip in space as the play moved gradually back toward the halfway line.

22-23. Injecting fresh impetus into the move, Matip then surged forward several yards with the ball at his feet before making a nimble interchange of passes with Diaz, who had drawn two defenders to him with his back to goal on the edge of the United box.

24. The return ball from Diaz was fizzed back to Matip, who in turn drilled a low, angled pass into Sadio Mane, who had meandered into a pocket of space alongside Diaz just outside the area.

25. On the move and without so much as looking up, Mane curled a superb first-time ball around the corner and over the top of the United defensive line, looping his pass over the head of Harry Maguire and directly into the path of Salah, who had burst past Diogo Dalot and into the box. Salah then took a touch at pace and held off the defender before slipping a low finish past David de Gea.

Salah's goal ended an eight-match goalless streak for club and country, his longest barren run since he went eight games without a goal in March 2019. He then scored his second and Liverpool's fourth in the closing stages to take his tally against United to eight goals in his last four appearances against them.

Mane also got himself on the scoresheet by netting Liverpool's third goal, meaning he and Salah had both scored in the same Premier League game for the 32nd time - more than any other pair in the history of the league.

Liverpool managed to beat United and Tottenham Hotspur to the signing of Diaz from Porto in January, and he has fit right in with the rest of Jurgen Klopp's side. Here the 25-year-old, Mane and Salah all scored and assisted at least one goal each.

As for United, they could only muster one shot on target, with half-time substitute Jadon Sancho's tame effort from range early in the second half easily gathered up by Alisson.

Fernandes was United's most involved player, as for as the statistics go. The midfielder had just 61 touches of the ball -- still fewer than every player in the Liverpool starting XI apart from Diaz -- and ended the evening with a successful completion rate of just 71.1% from 45 passes attempted.

As if to further highlight the growing gulf between the two sides, Liverpool's ongoing and impressively dominant eight-game unbeaten streak against United in the Premier League is their longest since 1927 -- the year before the roof was built atop The Kop at Anfield.

While Liverpool are still chasing a historic Quadruple by winning the Premier League, FA Cup and Champions League to add to February's Carabao Cup triumph, United are -- incredibly -- still in contention for a top-four finish. But, if that second goal at Anfield is anything to go by, it will be a long time before they will be able to even think about competing at Liverpool's level again.