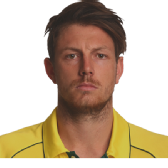 A career-best five-wicket haul from James Pattinson and a sparkling innings from AB de Villiers helped the Brisbane Heat hand out a crushing seven-wicket defeat to the Adelaide Strikers at the Gabba.

de Villiers starred on his BBL debut taking a catch and making a classy 40 from 32 balls to help guide the Heat through the small chase of 111 after a poor start. Matt Renshaw batted superbly alongside him making 52 not out.

Pattinson set the game up ripping through the Strikers' top order taking five of the first six wickets. Wicketkeeper Jimmy Peirson equaled the BBL record for dismissals with five as the Strikers were bowled out for 110 with an over to go.

The Heat were 2 for 11 after eight balls of the chase before de Villiers put on a clinic alongside Renshaw. They looked certain to win two-down until de Villiers picked out long-on with his first and only mistake. The Heat still won by seven wickets with 28 balls to spare to move inside the top-four on the BBL table and also receive a big net run-rate boost.

The Strikers suffered the worst powerplay in their history slumping to 4 for 48. Pattinson was the sole destroyer but he was also a huge contributor to their runs tally. He was fortunate with two of his wickets, strangling both Phil Salt and Harry Nielsen down the leg side as both tried to glance bad balls fine. Pattinson's extra pace and bounce accounted for Jake Weatherald and Travis Head. Weatherald was caught behind flashing a drive on the up while Head was cramped by a short ball into his ribs, in a similar fashion to how New Zealand's Neil Wagner dismissed him several times during the Test summer, and Peirson handled the top edge with aplomb despite running into Mujeeb Ur Rahman at short fine. However, Pattinson also conceded four boundaries in the last over of the powerplay.

Jono Wells has been the Strikers' safety valve in the middle order throughout the season but he was caught at cover for just 14 in the 10th over to hand de Villiers his first catch in the BBL and Pattinson his first T20 five-wicket haul. Rashid Khan walked out and played a nice cameo which included a couple of stunning shots. He drilled Mitch Swepson inside-out over cover and launched Ben Cutting into the second tier at long-on. He copped a blow on the shoulder trying to reverse sweep a short ball from Josh Lalor and holed out next ball as the Strikers folded.

AB worth every cent

The Heat have had trouble chasing so far this season and they wobbled early again slumping to 2 for 11 courtesy of two woeful shots from openers Chris Lynn and Max Bryant. Lynn holed out needlessly to mid-on for a golden duck, off just the third ball of the innings, without so much as a sighter. Khan bowled the second over and Bryant didn't have a sighter either. His first swipe at Khan landed safely wide of mid-on, his second failed to make contact and he was bowled comprehensively through the gate.

De Villiers walked out under a bit of pressure in his first innings for the Heat but made the game look incredibly easy. He cover drove Khan for four first ball and proceeded to put on a batting clinic. Never at any stage was he under pressure. He found the cover fence three times off Khan, including once off the back foot with a fabulous lofted drive. He didn't take a risk and played with trademark assurance. He got excellent support from Renshaw, who struck five fours a strong six down the ground in an unbeaten half-century, before pulling a long hop down to long-on. But Renshaw and Joe Burns finished the job with 28 balls to spare.