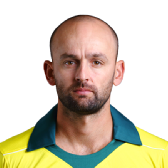 Though rain curtailed his chances of delivering an outright victory, Mitchell Swepson showed why he looms as a major threat to New South Wales in the Sheffield Shield final with another outstanding exhibition of wrist spin bowling on the final day of the drawn match in Wollongong.

A rematch between these two teams was confirmed when Western Australia were bowled out at the WACA having been set 480 by Tasmania. With the Covid-19 situation having now improved in Brisbane the five-day final appears set for Allan Border Field from April 15-19.

Swepson finished with 4 for 59 to take his season tally to 29 wickets at 22.44 from just four Shield matches - either side of a neck injury - and again spun the ball expansively on a deteriorating surface to keep the Blues batsmen wary throughout a day that ended shortly after lunch due to persistent showers.

Nathan Lyon was named Player of the Match for his workmanlike figures of 6 for 128 in the Bulls' first innings of 433, but it was Swepson's improvement across the course of the game to be the standout threat on the final day that would have excited the Australian selectors most of all.

One early leg break that pitched around leg stump and then fizzed past the defensive bat of Jason Sangha underlined the difficulty of facing Swepson. Matt Gilkes was fortunate to survive a vehement lbw appeal when he padded up on the back foot to a delivery that spat out of the footmarks and appeared destined to hit the stumps in the same way Daniel Hughes had been bowled on the third evening.

Sangha made it as far as 29 before he flicked Swepson from around the wicket into the lap of the short leg fielder Bryce Street, who somewhat fortuitously hung on. Gilkes went on to his second half century of the match, as part of a young NSW batting line-up that functioned rather better than the older top six that had been routed in their previous game against Tasmania, before edging Brendan Doggett behind in the last over before lunch.

When play resumed, Swepson made short work of the debutant Lachlan Hearne, tempting the left-hander into a drive and then zipping a leg break back between bat and pad to rumble the stumps. At this point, the Blues led by only 84 runs with five wickets remaining and more than half the day's allotted overs to be bowled.

Wicketkeeper Baxter Holt eked out 18 deliveries without scoring as the lead advanced by another nine runs, before the rain that briefly interrupted the morning session returned more steadily to hasten the abandonment.