MIAMI (AP) -- Miami freshman Jon Peattie was singing along with
the music playing in the Orange Bowl, trying to stay calm. He had
to wait through three timeouts called by West Virginia as he set up
again and again and again for the game-winning field goal. 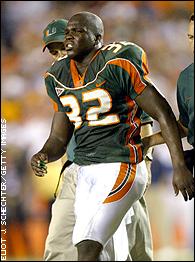 Peattie then calmly kicked a 23-yard field goal with 11 seconds
remaining as the second-ranked Hurricanes staved off an upset with
a 22-20 victory over West Virginia on Thursday night.

"I never expected it," Peattie said. "But something I learned
when I came to college was that every kick counts, no matter how
short it is."

Peattie finished with a school-record five field goals, his
biggest coming after Miami drove 66 yards with two minutes
remaining. Peattie's other field goals were 22, 32, 43 and 30
yards.

Brock Berlin needed a fourth-down completion to Kellen Winslow
to keep the drive alive. On fourth-and-13 from the Miami 25, Berlin
hit Winslow over the middle. The tight end made a leaping catch for
an 18-yard gain.

Berlin finished 37-of-54 for 352 yards with a touchdown and two
interceptions. Winslow caught 10 passes for 104 yards.

"Winslow's probably the best in the country," West Virginia
coach Rich Rodriguez said. "He made a great play and made it
happen. That's why he's going to be playing on Sundays."

West Virginia spent all three of its timeouts trying to rattle
the first-year player. But it didn't work. He drilled the kick
between the uprights.

"I'm glad we have a great kicker," Berlin said.

The Mountaineers had one final chance with five seconds to play,
but Sean Taylor intercepted Rasheed Marshall's deep pass. Taylor
started to run, then dropped to a knee, jumped up and heaved the
ball into the air.

Miami (5-0, 2-0 Big East) won its 37th straight regular season
game and remained unbeaten heading into a showdown at No. 6 Florida
State next Saturday.

"You look back at all the national champions, and very seldom
will they never have to dodge a bullet," offensive tackle Eric
Winston said. "We played badly, but we won. It's a lot better than
playing well and losing."

The Mountaineers (1-4, 0-1) were poised to pull off the biggest
upset in a season of upsets when Quincy Wilson ran around and over
Miami's defense for a 33-yard touchdown with two minutes remaining.

Wilson took a screen pass from Marshall on third-and-13, juked
Vince Wilfork behind the line of scrimmage, broke a tackle and then
bowled over and jumped over safety Brandon Meriweather at the 10
and scored to give the Mountaineers a 20-19 lead.

It was the first third-down conversion of the game for West
Virginia.

Miami running back Frank Gore sprained his left knee early in
the game, and Berlin struggled at times without the team's main
offensive weapon.

The Hurricanes had hoped to get their offense on track against
the Mountaineers, but continued to misfire behind Berlin. He
telegraphed some passes, forced others into coverage and had little
success running an offense that ranked sixth, eighth and fifth
nationally the last three seasons.

He did play well at the end -- much like he did when Miami came
from behind to beat Florida early last month.

The Hurricanes' offensive struggles were hidden through the
first four games because of seven returns for touchdowns -- two
punts, two interceptions, a kickoff and a fumble.

The Hurricanes entered the game ranked 32nd in the nation in
total offense and the problems were evident against West Virginia.

Without Gore, Jarrett Payton ran 21 times for 69 yards. But the
son of Hall of Fame running back Walter Payton was hardly an answer
to the Hurricanes' woes.

He fumbled with 3:32 to play, giving the Mountaineers the ball
near midfield. That drive ended five plays later with Wilson's
touchdown.

"We made it hard on ourselves ... but we overcame it," Winslow
said. "That's what champions are made of. We went down and got the
field goal."