The Boston Red Sox have offered J.D. Martinez a five-year, $125 million contract, an offer that The Athletic’s Ken Rosenthal reported has left Martinez “fed up” with the Red Sox and that he would rather sign with another team. Evan Drellich of NBC Sports Boston also talked with Scott Boras, Martinez’s agent, on Tuesday, and Boras said Martinez was prepared to begin spring training without a contract.

While dialogue between Boras and the Red Sox continues, maybe it’s time to admit this deal just may not get done like we’ve speculated all winter. So it’s time to find Martinez a new home.

Arizona Diamondbacks. Why not return to the place where you hit like Lou Gehrig for three months? Martinez slugged .741 in his 62 games in the desert, and if he wants to play the field then he should go back to the National League. We know the Diamondbacks have expressed interest in bringing Martinez back, so even if their payroll looks about $25 million higher than last year’s without Martinez, there must be some flexibility here.

Plus, they need him. Similar to the Rockies, the Diamondbacks have a tendency to overrate their offense because of home-park inflation. The only regulars to post an above-average OPS last year were Paul Goldschmidt, Jake Lamb and Chris Iannetta, and Lamb can’t hit lefties and Iannetta signed with the Rockies. Outfielders A.J. Pollock and David Peralta haven’t exactly been pictures of durability, and the less Yasmany Tomas plays the better. The issue is giving Martinez what he wants and not blowing out the budget. 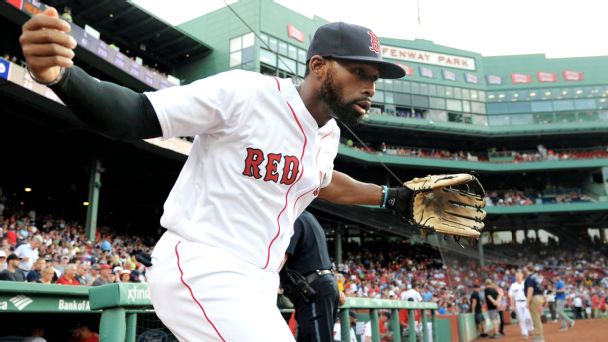 What should the Red Sox do if J.D. Martinez really is "fed up"? Scott Lauber »

Cleveland Indians. OK, this is admittedly a long shot, as the largest contract the Indians have ever given out was the three-year, $60 million contract given to Edwin Encarnacion last offseason. Yes, the payroll is up to $130 million, but that’s basically the same as last year, and remember that each franchise will get about a $50 million payout this year from the sale of a majority stake in BAMTech to Disney. Even then, a lot of money comes off the books after this year: Michael Brantley ($11.5 million), Cody Allen ($10.5 million) and Andrew Miller ($9 million) will be free agents. If you’re thinking about the long-term ramifications, well, the Indians have already signed Jose Ramirez through 2023 to what will end up as a Jose Altuve-like bargain. That leaves Francisco Lindor, but he’s not a free agent until 2021, so there wouldn’t be much crossover at the end of a Martinez contract and Lindor’s free agency.

The main reason to sign him: This may be the Indians’ best chance to win a World Series. They have Ramirez, Lindor and Corey Kluber in their primes, they have those two weapons at the back of the bullpen, and they have a great rotation. What they need is one more big bat. Does Larry Dolan want to end that 70-year World Series drought or not? How much better does this lineup look with Martinez in the middle?

Atlanta Braves. The Braves had 10 players on Keith Law’s top 100 prospects list, including overall No. 1 Ronald Acuna. But eight of the 10 were pitchers, and even if the Braves aren’t ready to contend in 2018, and even if Acuna takes over in one corner outfield spot at some point this season, they’ll still need offensive help in the future, especially given the uncertainty over Dansby Swanson's bat.

Money isn’t an issue here, even for the tight-fisted Liberty Media ownership. The only players signed beyond 2018 are Freeman, Ender Inciarte and Julio Teheran, and Inciarte tops out at $9 million in 2022. All these prospects will be making pennies once they arrive. With Inciarte in center and Acuna in one corner, the Braves can absorb Martinez’s below-average defense. This would create a foundation of Freeman, Acuna, Inciarte and Ozzie Albies. If the pitching develops as expected, the Braves will be in the playoff hunt -- maybe even as soon as 2018.

Seattle Mariners. Desperate times call for desperate measures. The Mariners not only have the longest playoff drought in MLB, they have the longest playoff drought of any franchise in the big four pro sports leagues. FanGraphs projects the Mariners to win 81 games, five behind the Angels for a wild-card spot. Baseball Prospectus projects them to win 83, one behind the Rays for a wild-card spot. The Mariners potentially have more to gain by finding a few more wins than any other team.

It's not like a Ben Gamel/Guillermo Heredia platoon in left field is a roadblock. Plus, with those two and Dee Gordon in center, the Mariners are punting power at two outfield slots. They had just 46 home runs from their outfield a year ago -- Martinez could do that all by himself. OK, you jack up the payroll for one year, but Nelson Cruz is a free agent after this year and you probably let him go given his age. They’re paying a combined $15 million for David Phelps, Marc Rzepczynski and Erasmo Ramirez, and Felix Hernandez’s megadeal has two more seasons. Jerry Dipoto hasn’t made a move yet in 2018. You know he’s itchy!

New York Yankees. The best way for Martinez to stick it to the Red Sox: sign with the Yankees! Sure, the Yankees already have a glut of outfielders. Sure, they’re trying to stay under the luxury tax. Let’s be clear here, however: The Yankees can afford to go past the $197 million luxury tax if they want. But they don’t have to.

Cot’s Contracts has their estimated payroll at around $162 million. Throw in about $10 million for benefits and other things that factor into the tax threshold and you are at $172 million. If Martinez needs a six-year, $150 million contract, that’s an AAV of $25 million, pushing the Yankees right up to that $197 million figure. So you need to make a deal: Jacoby Ellsbury makes $21 million each of the next three seasons and he’s the guy you want to trade, but that’s not going to happen unless the Yankees eat a large chunk of that salary. Even then, does anyone want Ellsbury at $30 million over three years? Probably not. So you have to trade Brett Gardner, making $11.5 million this season with a $12.5 million option for 2019. You can trade that contract.

Then we get this lineup:

Here’s the other catch: Signing Martinez could actually save the Yankees money over the long haul since they wouldn’t have to sign Manny Machado (as everyone seems inclined to believe they’ll do). Martinez gives you Machado’s bat for a lower AAV, and if Andujar is legit, they won’t need a third baseman anyway.

Plus, you get to make Red Sox fans cry and create one awesome Murderers’ Row of sluggers. Can you say 300 home runs?