OKLAHOMA CITY -- Anthony Davis and DeMarcus Cousins have thrived in the NBA without each other for years. And while the combination of the two All-Star big men has the potential to change the outlook for the New Orleans Pelicans for years to come, Sunday's first half in a 118-110 loss to the Oklahoma City Thunder proved that they can still nail a solo performance.

Two fouls, including his 18th technical of the season, just 1 minute, 35 seconds into the first quarter sent Cousins to the bench. Davis responded with the sort of quiet dominance that has fueled his rise into the NBA's elite, setting a new career- and franchise-best with 24 points in a single quarter.

"It sucks that I keep leaving him out to dry," Cousins said. "I've been in foul trouble the past two games. It sucks, but he's carrying the load."

The second quarter was Cousins' turn to take over. Davis didn't attempt a shot in three minutes the following quarter, but Cousins, still in (Mardi Gras) purple for one final game, went off for 19 points and five rebounds.

"I told myself when I went back in I'd go out of my way to [be aggressive]," Cousins said.

Together, "Fire and Ice" scored and assisted on 51 of the Pelicans' 59 first-half points, according to ESPN Stats & Information, and finished with 69 points, 17 rebounds, 7 assists and 21 free throws.

But while the two big men took turns at the slow cooker, Jrue Holiday, the third in the Pelicans' newly formed troika, slowly slipped into the background.

Holiday seemed to be on his way to fitting into his third seat in Saturday's loss in Dallas, finishing with 18 points, seven rebounds and six assists despite 5-for-17 shooting. But he ended Sunday's game with just six points for the second time in the three games since the Cousins trade, his third-lowest output in 44 games this season.

"We've got to find a way to get him going offensively," Davis said. "I think he's looking to be a pass-first point guard, and we just need him to be aggressive. I think when we get him going, we'll be fine."

"There might be certain times," he said. "[I'm] obviously trying to figure it out. Again, they're so dominant down there, you can't not throw it to them, especially when you have Boog [Cousins] down there. There might be times of that, but there's times when I have wide-open shots and just overthink it." 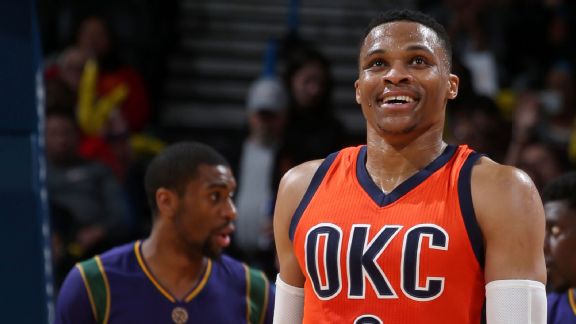 Russell Westbrook torched Boogie, Brow and the Pels with a triple-double.

While Davis has been the engine in his five seasons with the Pelicans, Holiday, the player picked to unleash the wunderkind big man with a trade on draft day 2013, has often been the driver. New Orleans entered the All-Star break just 23-34, but was 21-21 with Holiday in the lineup.

But Holiday has never functioned as an orchestrater on the level of a Chris Paul. His assists have come along with his scoring, often via a patient, prodding approach.

Holiday had eight assists against the Thunder, but appeared to be playing for the pass more than usual. With both Cousins and Davis in foul trouble, the lack of another option on a roster thinned-out by last week's trade proved more glaring than in any game of their 0-3 start in the Cousins era.

"We don't need him to come out and try to be a guy who can get 15 assists," Davis said. "That's not who he is, that's not how he's been helping us. He's been [getting] seven, eight assists but makes sure he's scoring. And we need him to score. We need him to be who he is -- a great scorer and a great defender.

Cousins said he and Davis talked after that game and tossed around the idea of getting the rest of the team involved earlier, including Holiday.

"It's well-documented that we can both play," Cousins said. "We were kind of speaking about what we can do better after the game, and I think it's going to take me and him sacrificing a little more just to get the guys around us involved. We need them to make shots. We need them to feel involved. If it takes us sacrificing for the betterment of the team, then that might be what it takes."

More than anything, they need more than just two superstars.