Re-birth of Slash: NFL teams looking for the next Taysom Hill
2yEric Williams
Better, worse or the same: How the Los Angeles Chargers' defense changed this offseason
8hShelley Smith
Better, worse or the same? How the Los Angeles Chargers' offense has changed this offseason
7dShelley Smith
Let's stack offensive arsenals for all 32 NFL teams: Can any team top Tom Brady's weapons?
7dBill Barnwell
Chargers' Justin Herbert uses golf tournament as team building going into Year 2
12dShelley Smith
NFL Future Power Rankings: Projections for all 32 teams for the next three seasons
8dJeremy Fowler, +3 More
The NFL's best quarterbacks: We asked 50 execs, coaches and scouts to rank the top 10
15dJeremy Fowler
NFL execs rank the best safeties: How do Minkah Fitzpatrick, Jamal Adams, others stack up?
18dJeremy Fowler
Aaron Rodgers-Packers split? History shows it would be nothing new
7dRob Demovsky
Ranking the NFL's top 10 edge rushers: Why Myles Garrett is No. 1
22dJeremy Fowler
Ranking the top NFL wideouts for 2021: Adams, Hopkins or Jones at No. 1?
13dJeremy Fowler
Which NFL teams have the best -- and worst -- rosters? Ranking all 32, starting with the champs
27dBen Linsey
NFL offseason in review: Which teams hit their goals, plus biggest remaining questions for all 32
29dNFL Nation
Jun 2, 2019

During joint practices and a preseason game against the Saints, Bradley and the Chargers got an up-close look at the versatility of a do-everything backup quarterback.

"You rarely see a guy that size with that type of speed," Bradley said. "Sometimes you see speed and you go, 'Well, he's going to play wide receiver.' But because of his size, he can play multiple positions."

Hill ran for an 11-yard touchdown, threw to Tre'Quan Smith for a 5-yard score and also converted a fake punt for a first down in a 33-7 exhibition win over the Chargers.

Wanting to add a similar athlete to an already-explosive offense, the Chargers selected North Dakota State quarterback Easton Stick in the fifth-round of this year's draft.

Stick is one of a handful of players around the league added to the back end of rosters who could serve in a similar role to Hill's for the Saints.

Taysom Hill Effect: A Tale of the Tape 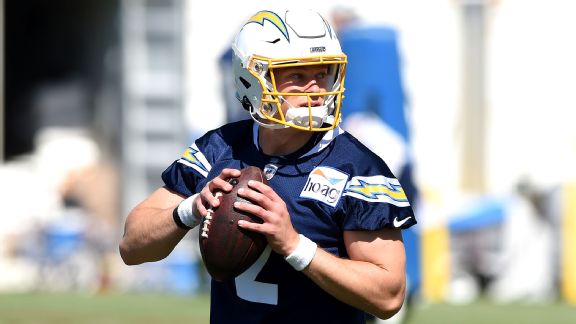 With the success the New Orleans Saints had with backup quarterback Taysom Hill last season, some NFL teams are looking for players who can a fill similar role. Here's a closer look at the measurables of some of those players.

The Baltimore Ravens drafted Trace McSorley in the sixth round to back up athletic signal-caller Lamar Jackson.

"You saw what the Saints have done down there with their third quarterback," Ravens coach John Harbaugh said about McSorley. "That's something we'll have a chance to do, too, with Trace. He's going to be able to play special teams as well. The more you can do. You want players with roles, and he's a guy that has a chance to have a big role for us."

With Philip Rivers nearing the end of tenure as the team's starting quarterback, Stick could be viewed as his eventual replacement: Chargers offensive coordinator Ken Whisenhunt likes the fact that Stick operated in a conventional offense at North Dakota State, taking snaps under center and using the play-action game, along with the spread concepts normally seen in the collegiate game.

However, Stick also totaled 2,523 rushing yards and 41 rushing touchdowns as a dual-threat quarterback for the Bison.

"I have the ability to run around and make plays outside of structure, try to be a good athlete and make different plays," Stick said. "I feel like I can do a little bit of everything. Really, I'm just excited to be in that quarterback room and get an opportunity to learn."

Chargers coach Anthony Lynn is intimately familiar with using a running quarterback effectively on offense. While serving as the offensive coordinator for the Buffalo Bills in 2016 under the direction of current Bolts' backup quarterback Tyrod Taylor, Lynn's unit led the league in rushing offense. Taylor contributed 580 yards and averaged 6.1 yards per carry with six rushing scores.

Lynn acknowledges Stick is not exactly in the same mold physically as Hill. Although Stick will focus on learning the quarterback position first for the Chargers, Lynn sees the rookie quarterback as someone who can diversify the Chargers on offense.

"He runs the RPOs [run-pass options] and he's also a pretty mobile guy," Lynn said. "They did a lot of things with him [at North Dakota State].

"But we are going to teach him our system. He's going to play quarterback for us. We have running backs -- we don't a need a quarterback that can run all over the place, but he can certainly create when he has to."

Seeking an advantage on game days, NFL teams are looking to adopt some of the things the Saints have had success with by using Hill.

"You have to look at college football, and a lot of quarterbacks are much more athletic now because of spread offenses, RPOs and quarterback-designed runs," said ESPN NFL analyst Matt Bowen, who played seven seasons in the league as a defensive back and core special teams player. "You don't see as many pro-style offenses as much anymore.

"But it still comes down to Day 3 picks. And Day 3 picks, unless you're challenging for the No. 1 quarterback job, you've got to play special teams to actually dress on game days. So if I'm a personnel guy, and I'm going through the middle of the fifth round on looking for guys with athletic traits, that's what I would do -- someone with high-end athletic traits and versatility that can help our football team."

According to ESPN Stats & Information data tracking, Hill played 177 snaps on offense for the Saints last season, including 57 at quarterback, 58 at tight end, 48 at receiver and 14 at running back.

Hill finished as the Saints' third-leading rusher, totaling 196 yards on 37 carriers and had two scores. He averaged 5.3 yards per rush. Hill also completed three of seven throws for 64 yards and totaled three receptions for 4 yards.

Per Pro Football Focus data, Hill played on 387 special teams snaps for the Saints. He returned 14 kickoffs for 348 yards (24.9 avg.), made six tackles on special teams and also blocked a punt.

"Look, he does so many different things. He's a football player," Saints head coach Sean Payton told ESPN.com. "When his game is over with, and it's a grass field, [his uniform] is gonna be dirty."

The original Slash, Kordell Stewart was a second-round selection in 1995 of the Pittsburgh Steelers who started out as an all-purpose player before winning the starting quarterback job.

Stewart eventually earned a trip the Pro Bowl in his third season because of his ability to lead a team from the quarterback position. He finished 48-34 as a starter during a nine-year NFL career, leading the Steelers to the AFC Championship Game during the 2001 season.

Due to injuries and wanting to get on the field in his second NFL season, Stewart played receiver for Pittsburgh. He finished with 171 rushing yards, 293 receiving yards and eight total touchdowns during that 1996 season.

At 6-1 and 220 pounds, possessing electric speed and a rocket arm, Stewart was ahead of his time. Decades later, Stewart's dual-threat abilities spawned a new generation of quarterbacks who can stress defenses with their athleticism and ability to throw the football.

An NFL analyst, Stewart wistfully looks at the league now and wonders "What if?" as a 5-10 mobile quarterback in Kyler Murray is selected No. 1 overall in this year's draft by the Arizona Cardinals. And up in the Pacific Northwest, the Seattle Seahawks made 5-11 quarterback Russell Wilson the highest paid player in the league, signing him to a four-year, $140 million contract extension.

"I played the game the way my abilities allowed me to play, period," Stewart said. "We're at the age now where the conversation of mobile quarterback is more relevant, and more tangible to what's being called from a scheme stand point.

"It's now an open conversation, as opposed to whispers behind the scenes of should we bring in a Kordell Stewart, and how do we preface it as far as the narrative? He'll come in as a quarterback, but he'll be more of an athlete.'" 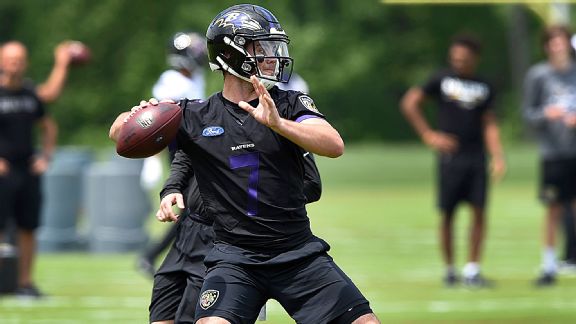 NFL offensive guru Mike Martz was the orchestrator of one of the most potent offenses in the league with the "Greatest Show on Turf" during his Super Bowl run with the St. Louis Rams.

Martz used cat-quick receiver Az-Zahir Hakim, a former option quarterback in high school, to run some plays as a quarterback out of shotgun during his time with the Rams.

"I think there's great value there," Martz said. "If you have a terrific athlete who's a 4.4-4.5 guy, even if he throws it kind of OK, to run the option and those other things that are going on in college, it's hard on the defense."

Teams now have to balance the risk/reward of using an athletic backup quarterback at other positions to create impact plays that can help them win games.

"It validates everything I've done," Stewart said. "It's a great thing to watch, especially in college football, to see these young kids that are mobile and athletic quarterbacks, not being forced to play another position.

"That lets me know that the coaching styles are growing in their mentality and their approach, along the scouting department. They're starting to believe and understand that it's OK for your quarterback to be an athlete."

Added Bowen: "You're going to get beat up on special teams. And that has to be something for NFL teams: Are they willing to take on a third quarterback who is more a true athlete and can he play on their coverage units? Because if they can't then how are you going to dress him for game days? How are you going to dress him to use him on just for plays on offense? That's tough. That puts some stress on your roster."