Our AFL experts tackle some of the burning questions ahead of the semifinal week.

Swans or Bombers; which team had the better year?

Rohan Connolly: Has to be Sydney, and that's with no disrespect to the Bombers, who appeared in complete disarray at the end of last year but somehow made the eight. The Swans finished third last in 2020, with just five wins from 17th. They've climbed to sixth (home and away finish) with 15 this season; that's a massive jump, and probably should be at least in a semifinal this week. Of the five teams who finished above them, they beat three (Geelong, Brisbane and the Western Bulldogs) and came within a couple of kicks of beating both the top two (Melbourne and Port Adelaide). They've had a phenomenal season, I reckon.

Jake Michaels: It's very close but I expected the Swans to be the better team this year, particularly after the Bombers lost some serious A-grade talent in the off-season, so with that said, I reckon I'm giving the edge to Essendon. To reach the finals was a huge achievement, and unearthing a couple of young stars in Nik Cox, Harrison Jones and Sam Draper will hold them in good stead going forward. Not to mention the emergence of Darcy Parish, the elevation of Jake Stringer and recruitment of Nick Hind. The club's in a good spot.

Matt Walsh: I don't think either side will leave the finals series disappointed given both far exceeded most of our expectations. Only Rohan predicted the Swans to make finals, and there were signs throughout the year from both teams that they are definitely on the right track. Both the Swans and Bombers injected exciting youth into their sides, and both notched important wins over some very good sides.

Jarryd Barca: Sydney for me, but these are two sides that can hold their heads high upon exiting the finals series. Only percentage separated the youthful, exuberant Swans from the top four and they far exceeded expectations. Ditto Essendon, but while the Swans will be brutally lamenting a missed elimination final opportunity, the Bombers almost overachieved by scraping their way into September (late August) action. Both were fun to watch this year, that's for sure.

You're Leon Cameron, what would be your message to Toby Greene?

RC: "Whatever it takes, Toby, however unnatural it feels, for God's sake, pull your %$#*&^% head in!" Okay, so nobody wants to rob a player of their natural instincts. Greene clearly is a competitive beast who feels like he needs to play "on the edge". Unfortunately, what he seems to regard as "on the edge" is according to the rule book, well over it. Which once again has cost him finals appearances. Surely a Greene, even on a tighter leash, has to be a lot better than no Greene at all?

JM: "Get out of my sight. But please come back next year!"

MW: "You're 27 years old for goodness sake." What else can you say? It's clear he doesn't care.

JB: I'd be bluntly telling him to pull his head in. There are just so many things wrong with Greene's unambiguous incident with Matt Stevic which we don't want filtering down to the lower levels. The Giants have to enter another cut-throat final without their premier match-winner; if I was the coach, I'd be fuming.

Should the AFL look to the NHL for expansion draft ideas?

The AFL needs to learn from the failings of setting up the Suns and Giants when it one day expands to include Tasmania, says The ESPN Footy Podcast's Matt Walsh.

RC: Geelong to hit back hard. There's a tendency to dismiss qualifying final losers, particularly those beaten as badly as were the Cats last Friday night. But five times since 2011, Geelong has lost a qualifying final, and on four of those occasions been able to rebound for a good semi-final win. GWS has the much better recent form (four straight wins against three losses from four games) and beat the Cats only three weeks ago, but I just think there's too much at stake for Geelong to go out in straight sets, and I suspect they might be stung into some serious action.

JM: I'm looking at Caleb Daniel as the man who will do the damage for the Bulldogs and drag them into a preliminary final. Whether it's through the midfield or off half back, Daniel can be one of the most destructive players in the competition. Having said that, he's been a little down and inconsistent of late, but I'm predicting a significant turnaround in form, one which will lift the Dogs over the Lions at the Gabba.

MW: Maybe it's because I was so disheartened by what I saw from Geelong on Friday night, but I can see the Giants giving them trouble this week, even without Toby Greene. This group has been building into some form over the past few weeks, with the added motivation of playing ex-Giant Jeremy Cameron and hearing calls of "they can't win without Toby", I can see Leon Cameron's troops punching above their weight. Does this mean they'll win? Maybe not, but I'm expecting (or hoping for?) a single figure result.

JB: I'm with Rohan here and think the Cats will come out all guns blazing to reach yet another prelim, as I just can't see them replicating last week's shocker in two successive weeks. But as for a really bold prediction? How about Jeremy Cameron slotting five-plus goals against his old side? There's an extra incentive for the star forward this week and having kicked just three majors in his past two games, I think he's in for a big night at the office.

Is there still a place for old-school coaches in the AFL? 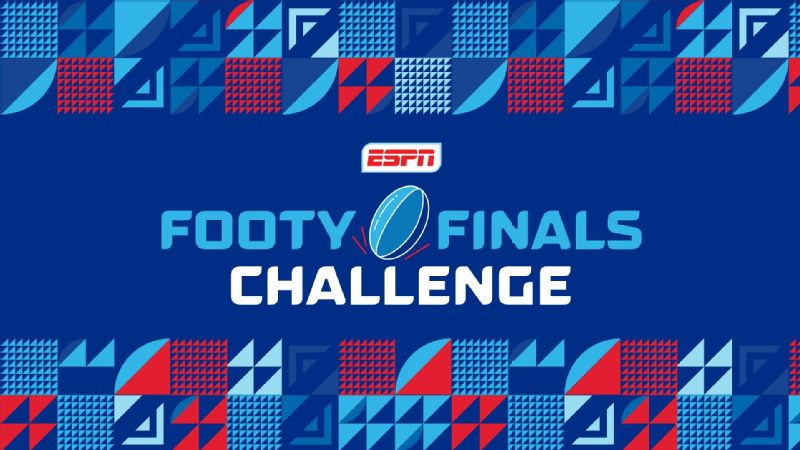 Put your footy knowledge to the test in ESPN's Footy Finals Challenge for your chance to win $1,000 in gift cards.

RC: Depends on the interpretation of "old school", really. Ross Lyon is being talked about as an "old school" coach, but I don't think it's that simple. His communication to players certainly seems old-fashioned, but his tactical nous and knowledge of the intricacies of game style is contemporary enough. But I do think in terms of how the message is communicated, the "my way or the highway" approach doesn't get younger generations on board. Look at the results Damien Hardwick got by a more encouraging demeanour and emphasising the positives with players rather than focussing on weaknesses.

JM: A coach who is basically verbally abusing their players? I hate to see it. This behaviour may have been acceptable and worked in the 1970s but guess what, it's 2021 now! If you want to get the best out of your players, ranting an raving isn't the way to go about it. Just ask Melbourne's Ed Langdon, who has gone from Ross Lyon to Simon Goodwin. Now I'm not saying Lyon is 100% old school, but I just don't think there's much place for any over aggressiveness from coaches in the modern game. Tactically, he certainly still has a place in the AFL.

MW: What does this question even mean? Is "old-school" a style from 10 years ago? Or 20, or more like 40? If Ross Lyon is considered an "old school" coach, then yes, there are still places for them in football - given there's clearly at least one team keen to secure his services.

JB: I don't think a coach's demographic profile really matters, but it could be horses for courses. However we define 'old-school' coach might struggle to relay messaging or interact with a rebuilding young squad compared to a more 'modern-day' or first-time coach, but their strategic astuteness and comprehensive knowledge of the game will always have a place at any AFL club. Are we subconsciously speaking about Ross Lyon here? If so, then my answer is simple: absolutely.